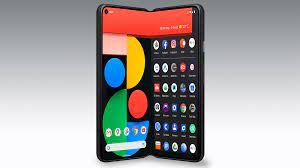 The first Android 13 quarterly platform release beta from Google has just been released, and developers have already found code that alluded to two forthcoming devices: the rumoured Pixel foldable and a new “Pro” tablet (via Android Police).

Developer Kuba Wojciechowski posted screencaps of code on Twitter that refers to the unfolded and folded states of a device he calls “Felix” and mentions the cameras it uses, which could be a 64-megapixel (MP) Sony IMX787 primary sensor and a 10.8MP Samsung S5K3J1 telephoto lens on the back of the phone. A second Samsung S5K3J1 might be placed around the front of the device, along with an 8MP Sony IMX355 sensor (the same one used by the Pixel 6A) on the inside.
The dual back camera setup of the foldable supports claims that it can fold horizontally like the Samsung Galaxy Z Fold. While animations spotted in Android 12L and an icon in Google’s camera app suggest towards a phone that folds like a book, it appeared last year that Google was also developing a handset that folds clamshell-style.

Wojciechowski also discovered references to a “Pro” tablet, called “t6pro” or “tangorpro,” in addition to information about Google’s upcoming foldable. Google confirmed that it is working on an Android-powered tablet at I/O in May, and developers have since discovered that “t6” and “tangor” refer to the device. However, the addition of the prefix “pro” to these codenames suggests that Google is also working on a more expensive model of the tablet. The coding only reveals that the two devices will have different rear cameras, as noted by 9to5Google.
These discoveries come just over a month before Google’s October 6 Pixel launch event, where the Pixel 7, Pixel Watch, and new Nest gadgets will be unveiled. But since the Pixel tablet isn’t expected to launch until 2023 and the foldable google pixel is said to have been postponed until next year, we don’t anticipate seeing either of those products during the event.

Read more about: The most recent iPad Mini from Apple is currently $100 cheaper at Amazon and Best Buy